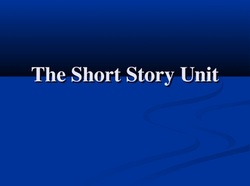 This unit will examine a variety a variety of themes and styles. Emphasis is placed on the structure of each of these types of stories.  Literary terms, plot structure and writing techniques are studied.  Students will apply their understanding of these concepts to reading, analyzing and responding to all short stories provided and are encouraged to respond to themes and arguments from a personal perspective.

ELEMENTS OF THE SHORT STORY

A story or narrative is constructed around the framework of a plot: the organized sequence of events or essentially what happens in the story.


The following are the components of narratives. Read the definitions and view examples and more detailed explanations.


PLOT- is the organized sequence of events
Foreshadowing occurs in Harry Potter very early in the books when he frees the snake in "The Philosopher's Stone." This first encounter with the snake foreshadows the importance of the reptiles in subsequent stories:  Harry's use of parseltongue, the battle with the basilisk and the link with Voldemort.
Flashback- is when the narrative moves from the current time to the past.


The film Forest Gump tells, through a series of flashbacks, the life story of a man with a below average IQ . The movie begins with Forest waiting at a bus stop. While waiting, he recounts his lifestory to a series of strangers. These flashbacks comprise the movie's plot.

The opening scene to the Pixar movie "UP" is comprised of flashbacks that allow us to see and understand the change in Carl.

Suspense- is that which makes the reader or audience uncertain or tense about the outcome of events. Suspense makes the reader ask "What will happen next?" Suspense is greatest when it focuses attention on a sympathetic character.

In the movie, "The Amazing Spider-Man", Spidey warns Gwen Stacy that Dr. Connors, aka The Lizard, is coming after her.

THE LORD OF THE RINGS TRILOGY is an excellent example of subplots.


The main storyline concerns Frodo's quest to return the ring. A secondary storyline is woven around the adventures of Aragon and Legolas' in their quest to protect the settlements and destroy the Orc armies.          A third subplot concerns Pippin's and Merry's escape from the Orcs. In the end, all three subplots are woven into the main storyline.
Complications and Crisis- series of difficulties forming the central action in a narrative.
Dilemmas- A dilemma is a difficult choice between two equally undesirable alternatives.


In "THE DARK KNIGHT" WHO WILL BATMAN  SAVE? HERO HARVEY DENT or LOVE INTEREST RACHEL DAWES.
In "THE MATRIX" WILL NEO TAKE THE RED PILL AND REALIZE THE PAINFUL TRUTH THAT THE WORLD IS IN RUIN OR WILL HE TAKE THE BLUE PILL AND LIVE IN A DREAM WORLD AS AN ALIEN BATTERY?

Denouement- the French term meaning "unraveling" or "unknotting," used to describe the resolution of the plot following the climax.   It is also known as the “Falling Action.”


In To Kill A Mockingbird, the climax is the attack on Scout. The denouement features the Sheriff and Atticus trying to cover up for Boo Radley's stabbing of Bob Ewell. Jem comes to terms with the injustice of trial, Scout succumbs to sleep, and Atticus wraps it all up by repeating the famous line,

“You never really know a man until you stand in his shoes.”

It's A Wonderful Life Part 1 by BuddyWatson
PLOT DEVICES - elements introduced to the story to advance, delay or resolve the conflict which include:

In Superman II Clark Kent gives up his powers, and when he does so, he's told that it's forever.  There's NO WAY to ever get his powers back.  EVER.
POINT OF VIEW

FIRST PERSON SUBJECTIVE - The narrator is a character in the story. This is easily identifiable through
the use of the word "I" or first person pronouns such as me, we, and my.

*Third Person Objective - In this case, the narrator operates like a camera or a 'Fly on the Wall' and reveals what is seen, but not what the characters think.

*Third Person Omniscient - This is a story told from the point of view of the storyteller who knows all the facts. The narrator is all-seeing and reveals the thoughts and emotions of all characters.

*Third Person Limited Omniscient -Third person limited is when the narrator is an outsider who sees into the mind of one character.

These terms constitute the main character types found in short stories and novels. Read the definitions and learn the key characteristics of each type. For further explanations and examples, view each clip.
ROUND CHARACTERS are characters who are complex and realistic; they represent a depth of personality which is imitative of life. They frequently possess both good and bad traits, and they may react unexpectedly or become entangled in their own inner conflicts.These characters have been fully developed (physically, mentally, and emotionally) by an author and are detailed enough to seem real. Protagonists (the main character) are normally round characters.

Here are a few of the complex, complicated characters portrayed by actor Jack Nicholson.

1. ONE FLEW OVER THE CUCKOO'S NEST by Ken Kesey

FLAT CHARACTERS are distinguished by their lack of a realistic personality. A flat character often only has one or two defining traits, though occasionally a flat character may have several defining characteristics, the character falls short of the complexity associated with a round character.

1. JACK SPARROW: Pirates of the Carribean:

A DYNAMIC CHARACTER  is one who changes significantly during the course of the story.
Changes considered to qualify a character as dynamic include changes in personality or understanding, changes in commitment, changes in values or morality. Changes in circumstance, even physical circumstance, do not apply unless they result in some change within the character. The protagonist in literature is nearly always a dynamic character.

SHREK begins the movie as a lonely, grumpy and self-centred ogre. By the end, he has fallen in love, made a friend and learned to be selfless and empathetic.
JACK TORRANCE in the Shining begins as a mild mannered writer and recovering alcoholic trying to salvage his relationship with his family. By the end of the movie, he is a possessed, psychotic determined to murder his loved ones.

A STATIC CHARACTER  does not undergo significant change. They remain basically unchanged throughout an entire work. Whether round or flat, their personalities and values remain essentially stable throughout the course of the story. This is commonly done with secondary characters in order to let them serve as thematic or plot elements.

PETER PAN: the little boy who never grew up.

A STOCK or STEREOTYPED CHARACTER is one which relies heavily on cultural types or names for his or her personality, manner of speech, and other characteristics. In their most general form, stock characters are narrowly defined, often by one exaggerated trait.

A CHARACTER FOIL  is a character that contrasts with another character, usually the protagonist and so highlights various facets of the main character's personality. A foil usually has some important characteristics in common with the other character, such as superficial traits or personal history. Authors typically use the foil to throw the character of the protagonist into sharper relief.

The protagonist is the main character in the literary work.

The antagonist is or are the forces that oppose the protagonist.

DIRECT CHARACTERIZATION:  The author directly tells the reader what the character is like.

In Dr. Seuss' "How the Grinch Stole Christmas," the narrative begins with the author's [narrator's] description of the Grinch.

View 2:08 to 3:40 mins:
Watch How the Grinch Stole Christmas [1966] (Classic) in Family | View More Free Videos Online at Veoh.com
INDIRECT CHARACTERIZATION: The character is understood through his / her speech, thoughts, actions, and appearance. An understanding of the character may also be determined from his or her affect on other characters.

This scene from Francis Ford Coppola's "Apocalypse Now," is an excellent example of indirect characterization: Colonel Kilgore's personality is presented through his motives, choices, actions and words. A narrator does not tell us what Kilgore is like, but we get a very strong image of this complex character through his actions, appearance and speech.
2. HANNIBAL LECTER: "Silence of the Lambs"

An external conflict is often a physical conflict against an outside forces: the environment, a setting, an enemy (antagonist).

MAN VS. THE ENVIRONMENT

TOUCHING THE VOID: Although much of this movie involves battling the elements during the ascent of a difficult climb in the Andes, the novel also looks at a very difficult moral dilemma the protagonist faces.
MAN VS. MAN [A protagonist vs. an antagonist]
HARRY POTTER: The final battle between Harry and Voldemort.

An internal or psychological conflict usually involves the making of a difficult moral decision such as when facing a dilemma, a difficult choice between two undesirable alternatives.

LORD OF THE RINGS
Gollum's internal dialogue, as his two personalities (Gollum, the creature obsessed / possessed by the ring and Smeagol, the hobbit he once was) battle over whether or not to kill Frodo and take the ring, is an excellent example of dilemma and internal conflict.

is the argument or general idea expressed by a literary work, whether implied or explicitly stated. Often it is an observation about life or people.
Short Story Interactive Refreshers:

How to Read a Short Story:

You will need a high speed internet connection to complete the work on three short films.  Please use the links provided for each film, and or within the assignment (copy and paste in address bar).

3.) "Lifted" is from Ratatouille http://www.youtube.com/watch?v=pY1_HrhwaXU

*Must read and complete where necessary:

Before reading Short Story #1 you will click the link below to begin your quest as we will be practicing and developing several skills as we read:
3.   Conflict and Climax activities (see links above for help) will get us to identify these parts of the stories,
and we will look at things the author is trying to show or teach us through them.
4.   Theme activities will help us understand the main message of the story.

*Remember- You will be asked to read various stories and complete the activities that follow during this unit.  Lastly, submit your work at the beginning of class next day.*


We will began reading short stories this week, starting with the story "Harrison Bergon."  You will use the visual media from the short stories walk-though (here: short story walk through. ) to review plot, setting, character, conflict and theme.

This story is a futuristic tale about a world where everyone is forced to become 'equal' in ways you would not expect. The story revolves around a character named George, whose above average intelligence has him forced to wear a device that rudely and regularly interrupts his thoughts so that he doesn't have an unfair advantage.

We see at one point in the story, near the end, that George gets up to 'grab a beer'. The reason he does this
reveals something important about George's character. Something has broken deep inside of George.
What is it?

There is also an assignment to be completed once the story has been read:

Story and Activities can be downloaded here

Short Story #2 - Lather and Nothing Else

Describes the experience of a small-town barber during Colombia’s civil unrest of the late 1940s.

Lather and Nothing Else from Zach Healey on Vimeo.

The story is about Lieutenant-Commander Oram, the captain of a submarine, with a crew of 21 other men. They were sent on a test run to make sure a new part of their sub worked the way it was supposed to. But the sub hit an unexpected mine and sank...

Short Story #9 -The Possibility of Evil